It was a “battle” that involved no enemy contact whatsoever, that left two submarines sunk, 270 British submariners dead and which the Royal Navy kept secret for as long as it could. But now new evidence has emerged that sheds fresh light on the “Battle of the Isle of May”.

Marine surveyors mapping the sea bed off the Fife coast have uncovered the exact resting places of the two Royal Navy submarines lost in one of the most unfortunate, but also little known, self-inflicted calamities in British naval history. 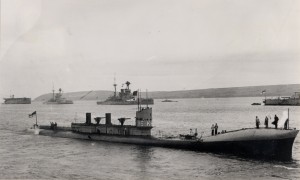