Charlotte Rostek from Dumfries House will be speaking to us on Tuesday 1 November 2011.

Dumfries House is a Palladian country house, located within a large estate, around 3 km west of Cumnock. It was built in the 1750s by John Adam and Robert Adam for William Dalrymple, 5th Earl of Dumfries, and inherited in due course by the Marquesses of Bute, in which family it remained until 2007. It is notable for having preserved much of its original 18th-century furniture in situ, some of which was specially commissioned for the house from Thomas Chippendale. 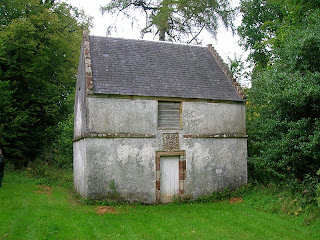 It has taken 68 years, but at last relatives of those who died in one of the worst British naval disasters might soon be able to discover where the bodies are buried.

Lawyers acting for North Ayrshire Council have just agreed to start the legal moves which, campaigners believe, will solve one of the longest lasting and painful mysteries of the Second World War.  A formal request will be made to the courts asking for the excavation of a patch of ground at Ardrossan cemetery in Ayrshire.

This excavation should allow archaeologists to peel away the topsoil from an area which is thought to contain the bodies of more than 60 British seamen – sailors who were dumped in the unmarked pit, apparently because the Royal Navy was desperate to keep the true story of their deaths a secret.
The sailors had been part of the complement of 555 serving on HMS Dasher. The Royal Navy vessel had started life as a freighter, but was hastily converted into an aircraft carrier during the early part of the war.

HMS Dasher sank suddenly in the Firth of Clyde in March 1943, ripped apart by an explosion which may well have been caused by a fuel leak and a dropped cigarette.
The loss of 379 of the 555 crew still represents the second-worst naval disaster in home waters. It is only surpassed in scale by the loss of the 833 men in the sinking of the Royal Oak at Scapa Flow in 1939.

Thirteen of the bodies which were brought ashore were buried with military honours at Ardrossan cemetery and another seven were buried at Greenock. However, dozens more which were washed up along the Ayrshire coast, were apparently taken away by the Navy and never seen again.

Members of the History Group may recall David Craig, speaking about the Arctic Convoys on 18 October this year, stating that HMS Dasher was one of the escort vessels protecting Murmansk Convoy JW53 which left Loch Ewe on  15 February 1943. The flagship was the cruiser HMS Belfast and the convoy's other escorts included the cruisers HMS Cumberland,  HMS Sheffield and 15 destroyers. David was then serving as the Third Radio Officer on SS Dover Hill.

As the convoy sailed northwards it encountered heavy winds. Six merchant ships were damaged and diverted to Iceland, along with HMS Sheffield and the armed trawler HMT Lord Middleton.  A Royal Navy flotilla led by the cruiser HMS Scylla relieved the original escorts off Iceland.  However, during the storm HMS Dasher had suffered engine trouble and returned to the Firth of Clyde, leaving JW 53 without air cover.  The convoy reached the Kola Inlet on 27 February 1943.
Posted by docken56 at 23:35 0 comments

The Royal Society has today(Wed. 26 Oct. 2011) announced that its world-famous historical journal archive – which includes the first ever peer-reviewed scientific journal – has been made permanently free to access online.

Around 60,000 historical scientific papers are accessible via a fully searchable online archive, with papers published more than 70 years ago now becoming freely available.


The Royal Society is the world’s oldest scientific publisher, with the first edition of Philosophical Transactions of the Royal Society appearing in 1665. Henry Oldenburg – Secretary of the Royal Society and first Editor of the publication – ensured that it was “licensed by the council of the society, being first reviewed by some of the members of the same”, thus making it the first ever peer-reviewed journal
Posted by docken56 at 14:41 0 comments

Last night, Graham Boyd and I had the pleasure of spending a couple of hours with our last speaker, David Craig, at his home.  He showed us many artefacts and photos which he had been unable to bring along to his talk.  He was also kind enough to show us his medals (both UK and Russian) and shared with us many stories which he had been unable to relate during his talk due to pressures of time.
A totally enthralling evening.  Thanks David.

Arctic Medal.For many years survivors of Arctic Convoys lobbied British Governments for the striking of a special Arctic Medal to mark their service in those waters in WW2. It all fell on deaf bureaucratic ears, the response being The Atlantic Star Medal covered such service.

Atlantic Star 1939-1945.
Recently the British Ministry of Defence has created an Arctic Star Emblem for all who served north of the Arctic Circle ie above 66 degrees 30 minutes North, for at least 24 hours in WW2.
This Emblem may be worn on the ribbon of either the 1939-45 Star, or the Atlantic Star.

Arctic Star Emblem.
The design concept of the Arctic Emblem was agreed with Arctic veterans’ representatives. It is a small metal star, mainly enamelled white, with a red dot in the centre and above it a scroll with the words “The Arctic” in gold letters on a blue background. The star represents the Polar Star, the white colouring symbolises ice and the red centre represents the field of the flags of the USSR and Norway.
Posted by docken56 at 14:06 0 comments

Our speaker on Tuesday 18 October is David Craig from Kilmarnock, who will be talking to us about his experiences serving in the Merchant Navy during WW II and the terrible conditions endured by those risking their lives to ensure supplies reached our allies in Russia.
If you want to learn more about these Murmansk Convoys, you will find information at the following websites.


If you don't get to Kilmarnock College early, you might have to stand!!  Almost a full house last time. 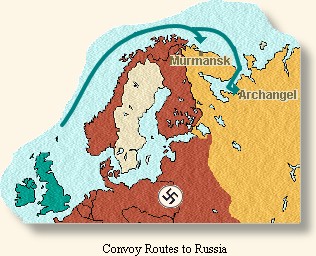 For those of you wanting to dig a little bit deeper into the study of the Jacobite Cause, following last night's stimulating lecture by Barbara Graham, here is a short booklist kindly provided by Barbara.  It is fairly comprehensive and covers a much wider time period than that discussed by Barbara at last night's meeting.

Tonight (Tuesday 4 October 2011) sees our first meeting for the new session.  Subscriptions for the year (£12) can be paid prior to the meeting in Kilmarnock College.  A warm welcome will be given to both new and returning members.  Come early to be sure of a seat and bring a friend.

Tonight's speaker is Barbara Graham, one of the founder members of KDHG.  Barbara has recently retired from her post at Strathclyde University but that does not mean that there has been any reduction in her normal very busy schedule.  I'm certain that her talk tonight on the 1715 Jacobite Uprising will be both informative and entertaining.
Posted by docken56 at 09:15 0 comments