Can you identify this Kilmarnock mill? 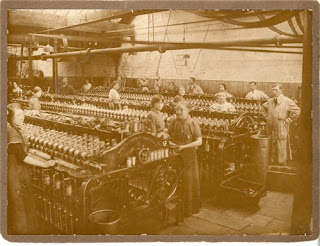 KDHG recently had contact from Sue Beanland in Yorkshire who forwarded the above photo with the following comment;

"The interior is of a mill in Kilmarnock around the early years of the Great War. My great grandfather, George William Waterhouse, was the manager and is positioned on the back row behind the machinery wearing a shirt and collar. He was killed at Arras in 1917 having volunteered for service. On his death my great grandmother and grandmother (who was a child at the time) were forced to return to family in Yorkshire. My grandmother had fond memories of her life in Kilmarnock and always longed to return. I hope to find out as much as I can about the town, it's industry and people. If only I had asked her more about it!"

We know that George was born in Yorkshire in 1883 and travelled to the USA before coming to Kilmarnock. His wife was called Sarah Ellen and they had a daughter called Evelyn who is Sue's grandmother.

Can anyone cast any light onto which mill this was and do you have any family who can perhaps give KDHG and Sue some more information? If so, please contact us with your stories.
Posted by Gary T at 19:21 0 comments

A new book brings Scottish history to light through maps

Maps revealing Scotland's history and changing aspects of Scottish life have been brought together in a fascinating new book.
'Scotland: Mapping the nation' shows how maps can explain aspects of the story of Scotland as a nation, from the Roman era to the satellite age.
It is the first book to take Scotland's maps and mapping seriously as a form of history.
More than 220 maps, mostly from the National Library of Scotland's map collections, were chosen to illustrate, for example:
Among the historic and unusual maps included in the volume are:
Authors Chris Fleet, Margaret Wilkes and Charles W J Withers have aimed the book at anyone interested in Scottish history. Historian T C Smout describes it as 'a real eye-opener' and 'utterly absorbing':

'... when you have read it you will never think of maps, or perhaps of Scotland, in the same way again'.
'Scotland: Mapping the nation' will be published by Birlinn on 3 October, in association with the National Library of Scotland, priced£30.
Posted by docken56 at 17:00 0 comments

The Reel History exhibition upstairs in the Dick is showing a series of short films about East Ayrshire and its people.

Go along to the Dick and enjoy the memories these films generate!
Posted by docken56 at 20:17 0 comments

As part of our recent website update we will be building a comprehensive online archive of local history. This will be found under the 'People, Buildings, Landmarks & Events' section.
We invite everyone with an interest in archiving their own piece of history to contact us to find out how to contribute.
Your entry may be a small but fascinating piece of family history, a fact about your house or street or a topic you have been researching. If it's of interest to you, it will be of interest to us ! This is your chance to help build easily accessible history for the community.
Please get in touch via the 'Contact Us' page.
Posted by Gary T at 21:36 1 comments