The Road to World War One.

The tragic events of Summer 1914.  On this day (28 July) the Great War officially began.

Email ThisBlogThis!Share to TwitterShare to FacebookShare to Pinterest
Labels: Great War, WW I 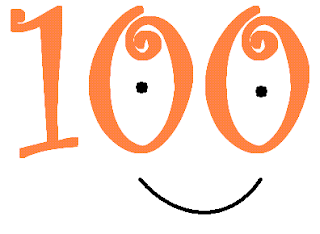 We've just realised that the previous post was our one hundreth.  We are now giving ourselves a big pat on the back.  Our first post was at the end of July 2010 and the record number of viewings (112 views) was for the post entitled "Swastikas Over Ibrox".  Still not getting many Comments though.

Nudge, nudge; wink, wink - The new programme for next session is almost ready for publication.

"Chiefly in the Scottish Dialect"

Chiefly In The Scottish Dialect

Burns Monument Centre Sat 28th July, 2012 - 7.30 – 9.30pm
Celebrating the publication of Robert Burns’s ‘Kilmarnock Edition’
The Burns Monument Centre will host an evening of talks, poetry and music in celebration of Robert Burns’s most famous work, “Poems, Chiefly in the Scottish Dialect”.
Zoe Strachan, Reader in Residence at East Ayrshire Libraries, along with Library staff, decided to celebrate the significance of the literary masterpiece by hosting an event to mark the anniversary of its publication.
The evening will kick off with Professor Alan Riach giving an insight into the Kilmarnock Edition and its significance in contemporary Scottish Literature.
Poet Cheryl Follon will entertain the audience with readings from Burns as well as her own works. The celebration will culminate with music from actor Tam Dean Burn’s band, ‘The Bum-Clocks’ (Scots for “a flying summer beetle”). Their unique take on Burns songs mashes together his work with contemporary legends such as Iggy Pop and Bob Dylan, bringing a raw rocky intensity, while staying true to Burns’s earthy Scots dialect, humour and passion.
The event has been sponsored by the Jefferson Restaurant which will be providing nibbles at the end of the performance.
Tickets cost £10/£8 concession and are available from the Dick Institute 01563 554300 and the Burns Monument Centre 01563 576695
Posted by docken56 at 20:37 0 comments

We've just received the following communication from Ross McGregor, the new Heritages Services Officer, working out of the Burns Monument Centre.  I have attached his e-mail in full:- 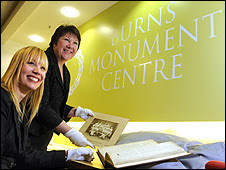 I’d like to introduce myself as the Heritage Services Officer at the Burns Monument Centre, Kilmarnock. I started in this new post a few weeks ago and I’m keen to establish links with local history groups and other organisations. My role at the Centre is to develop the services offered here, both to historians / researchers and to the wider community. As well as libraries and literature I have a strong background in education, which will play a key role in how I develop the heritage service.
I’ve had a look at your excellent website and see you’ve flagged up the SCRAN taster sessions taking place here and at other library venues. I plan to hold far more events here, which will hopefully promote access to local history, family history and archive resources for a wider audience. We already have some events taking place in July / August that may also be of interest to your members – on 28th July we have ‘Chiefly in the Scottish Dialect - an evening of poetry and music celebrating the anniversary of the Kilmarnock Edition’ featuring Prof Alan Riach, Zoe Strachan, Cheryl Follon and Tam Dean Burn’s band (I’ve attached more info below). I’m also planning workshops that allow participants to delve into the archive materials we have, starting with an Archive and Creative Writing workshop with Zoe Strachan and Christine Ewing (Principal Archivist) on Wednesday 15th August. I’m developing a blog for the Centre which will include information on events and workshops, but also snippets of local history and images. I began a series a displays of local history and archive material for visitors to browse and I’m hoping to include informal talks and presentations as part of this. The next display will be based around the national My Favourite Places project (Scottish Book Trust / BBC) with a particular focus on our local literary heritage.
I’ve established links with the Robert Burns World Federation and the National Library of Scotland, which will help to promote the significance of our collections. I want to ensure the historical collections and rare books we hold here in Kilmarnock are given proper recognition.
I hope my introduction is of some interest to the Group. If you’d like to have a chat about the developments at the Centre, what we can offer and how we could work together, please just get in touch.
Kind regards,
Ross.
Ross McGregor
Heritage Services Officer
Library, Registration and Information Services
Burns Monument Centre
Kay Park, Kilmarnock
East Ayrshire
KA3 7RU
01563 553655
www.burnsmonumentcentre.com
Posted by docken56 at 20:20 0 comments

SCRAN - A Window on Scottish Life

All using the Scottish resource base called SCRAN

You can learn more about SCRAN at:-
http://www.scran.ac.uk/


If you are unable to attend the above workshop, you might want to sign up for a similar workshop at the following venues:

The details are as follows-

Email ThisBlogThis!Share to TwitterShare to FacebookShare to Pinterest
Labels: SCRAN


60 years after the Korean War, Jackie Bird investigates why one of the biggest conflicts of the 20th century has slipped from public memory. The war, in which thousands of young Scottish national servicemen fought, caused more British deaths than the Afghan, Iraq and Falklands wars combined. Jackie Bird discovers her own personal connection to the conflict and traces what happened to one of its forgotten victims. She also travels to Korea with some of the surviving Scottish veterans, on an emotional journey to reclaim their past. Although their numbers are dwindling with the passage of time, many of the Korean War veterans still have to come to terms with a war the rest of the country has largely forgotten.

For more information about the involvement of the King's Own Scottish Borders in the Korean conflict, have a look at this website:- 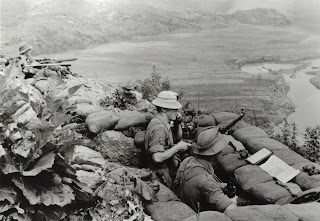 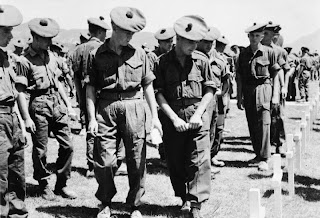 2014 will mark 100 years since the outbreak of the First World War.
The website www.1914.org will highlight centenary events and resources from across the globe 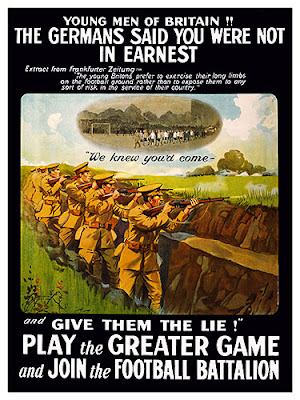 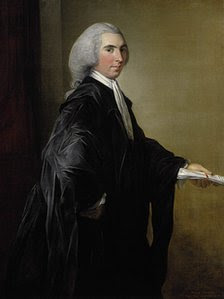 The private papers of one of Scottish history's most controversial political figures have been saved for the nation.  They had been on long term loan to the archives.

The Melville papers - which include the documents of Henry Dundas, 1st Viscount Melville - contain about 11,000 records which span 150 years.
The National Records of Scotland purchased the collection for £1.35m.
For three decades Dundas was the Grand Manager of Scotland, or Great Tyrant to his enemies, and the trusted lieutenant of British prime minister William Pitt.  He was the most powerful man in 18th Century Scotland.  After training as a lawyer, he was appointed Solicitor-General at the age of 24 and Lord Advocate at 33 but moved into politics.  He was a crucial figure in the expansion of British influence in India, and dominated the East India Company.  Dundas promoted harsh punishment for rebellious colonists in the Americas and prolonged the abolition of slavery.
He was the last person to be impeached in the United Kingdom, for misappropriation of public money, in 1806. He was acquitted, but never again held office. 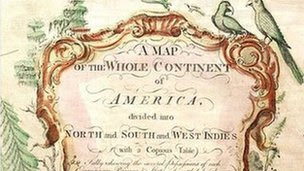 The collection has been described by historians as Scotland's 'crown jewels'

Effigies of Dundas, known as "the uncrowned king of Scotland", were burned rather than those of the King during the political and social unrest that accompanied the outbreak of revolution in France.
He is commemorated by the 150-foot high Melville Monument, designed by William Burn in 1823, in Edinburgh's St Andrew Square.  His papers have been on long-term loan to the archives but have now been bought from the Melville family for the permanent collection.
George MacKenzie, Keeper of the Records of Scotland, said: "Had we not acquired it for Scotland's archive, the papers would have been sold at auction at a price beyond the public purse and broken up and dispersed across the world. The Melville papers have been extensively used by the public since they were first loaned to us, and now that they're in public ownership, we'll be working hard to make them even more widely available."

The collection includes letters from economist Adam Smith, a copy of Admiral George Cockburn's journal which detailed Napoleon's last journey into exile and correspondence relating to the reform of Scotland's political system.  Richard Finlay, Professor of Scottish History at the University of Strathclyde, said the purchase was a major coup for the National Records of Scotland.

"The papers cast a considerable amount of light on the expansion of the British state and empire in the late eighteenth and early nineteenth century by giving us an insight into the activities of one of the key architects of the projection of British world power in this era.  Henry Dundas was a man who was at the centre of a web of patronage that cast itself around the earth. The Dundas dynasty was Scotland's greatest and most powerful political family since the Stuart monarchy."

Culture minister Fiona Hyslop said: "There are very few important politicians and military and naval men of the time who did not have dealings with the Dundases.  Their influence over the government, politics and society of Scotland was extensive - and their legacy lives on Scottish public life today, in our street names, our statues and now, in this public collection."

The purchase of the collection was funded by £725,000 from the Scottish government, and £625,000 from the National Heritage Memorial Fund.
Posted by docken56 at 20:53 0 comments

The Battle of the Somme started in July 1st 1916. It lasted until November 1916. For many people, the Battle of the Somme was the battle that symbolised the horrors of warfare in World War One; this one battle had a marked effect on overall casualty figures and seemed to epitomise the futility of trench warfare.   Take a moment today to reflect on this event in what was supposed to be the "war to end wars".
Posted by docken56 at 10:29 0 comments