Our speaker on Tuesday 30 October is one of our own members, Ian MacDonald.  He will be talking about Belgian Refugees in Ayrshire during World War 1.

Almost one quarter of a million Belgians fled to Britain after the German invasion of Belgium in 1914. The largest contingent of refugees ever to come here and their absorption into the host society was bound to be a complex process.

The Belgians were mostly assimilated smoothly into the local communities and they benefited at first from overwhelming public sympathy. Trade unionist fears that they would provide a pool of cheap labour soon dissipated as the war economy created conditions of full employment.

Much has been written about the conflict in Flanders and the numerous military battles, as the front line ebbed to and fro throughout the war.  Much has also been written about the terrible conditions in which the troops on either side had to live and fight; but very little is documented about the impact of the fighting on the local civilians.  Hopefully Ian will fill in some of the gaps in our knowledge as, appropriately, Armistice Day approaches. No Evidence of Mass Grave

Excavation work at  Ardrossan Cemetery, where there was thought to be a mass grave of bodies from the HMS Dasher disaster, has ended with no positive result.  The archaeology team, led by John Atkinson, hoped to find evidence of a grave site but instead found only undisturbed virgin soil.
HMS Dasher blew up off Arran in March 1943, killing 379 people, but only 23 bodies are in marked graves. The others have never been accounted for.
Some locals believe there could still be a grave site at Ardrossan Cemetery as well as a second site, possibly in a field within a two-mile radius of Ardrossan. 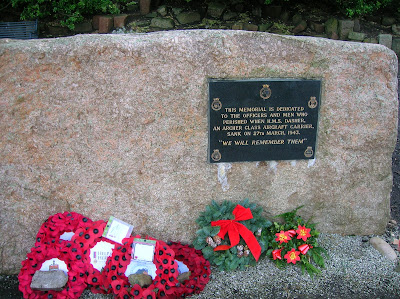 The mystery continues.
Posted by docken56 at 21:29 0 comments


Work began at Ardrossan Cemetery on Monday and a team archaeologists began their excavation on Tuesday morning 23 October 2012 to try and resolve an unsolved mystery dating back to World War 2.  They are endeavouring to determine whether victims of a war-time sea tragedy are buried in a mass grave.

The aircraft carrier HMS Dasher exploded and sank in the Firth of Clyde on 27 March 1943 with the loss of 379 of her 528 crew.  Of the 68 bodies recovered, 24 were buried at Ardrossan Cemetery and it is not known what happened to the other 44.  Local historian John Steele believes some of these missing 44 who perished in the tragedy may also be buried in the cemetery.  He persuaded North Ayrshire Council to petition a court for permission to excavate part of the cemetery suspected of being the mass grave.

Much secrecy still applies to this disaster and it's to be hoped that these excavations will go some way to answering some of the unresolved questions hanging over the event.
Posted by docken56 at 15:44 0 comments

Any members or visitors to the site are invited to contribute via our Blog.
We welcome any news or discussion on historical topics, not only local issues !

Since Kilmarnock College will be closed on the evening of Tuesday 16 October, our next meeting will be help in the hall of St Andrew's and St. Marnock's Church in St Marnock Street, Kilmarnock, adjacent to the police station.  We are very grateful to the Kirk Session of the church for making their premises available to us at short notice.  Please pass on this information to any members who may not have been present at our first meeting.  There will also be someone present outside Kilmarnock College to re-direct any members who turn up there.
The speaker will be Jim Steel who will speak to us about the Kirk Session Minute Books of Laigh Kirk from 1643 till 1900.

St Marnock'sChurch, Kilmarnock.  The chuch hall is at the left hand side.

A great start to our lecture programme last night (2 October 2012), with an eye-opening and thought provoking talk by Alex Lochrie.  He shared with us some of his wonderful experiences while serving with the French Foreign legion (la Legion d'Etrangere).  He left us with many points to ponder about the current conflict in North Africa and the Middle East.
You can find more information about the Legion, in English or French, at the following websites:- 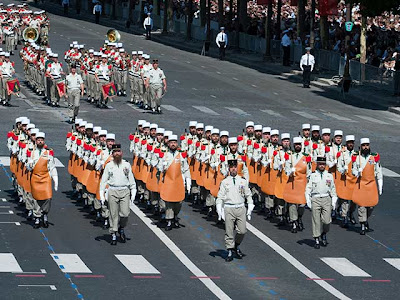 Summer is officially over when KDHG meet again for the winter session.
Tonight sees our new series of talks begin with what promises to be a fascinating insight to life in the French Foreign Legion by local man Alex Lochrie.
Please remember that it is always recommended to turn up a few minutes early for the first couple of weeks as it can take a bit of time to collect subscriptions.
Please have your membership form completed as far as possible to ensure matters move smoothly. Thanks.
Posted by Gary T at 08:57 0 comments