Will members please note that the AGM will take place at 7.30pm on Tuesday 20 March prior to that evening's talk in the Lecture Hall at Kilmarnock College.
Non-members are welcome to attend the talk and should note that the AGM normally lasts between 10 and 15 minutes.
Thank you.
Posted by Kilmarnock and District History Group at 09:08 0 comments 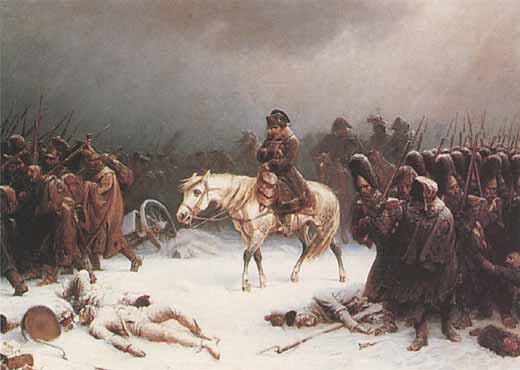 Emperor Napoleon I invaded Russia with his Grande Armée on June 24, 1812. This enormous force, featuring more than 500,000 soldiers and staff, was the largest European military force ever assembled at that time.

During the opening months of the invasion, Napoleon and his troops faced a Russian army in perpetual retreat. Refusing to engage Napoleon's superior army in a full-scale confrontation, the Russians, commanded by General Mikhail Kutuzov, burned everything behind them as they retreated deeper and deeper into Russia.

On September 7, the indecisive Battle of Borodino was fought, in which both sides suffered terrible losses
.
On September 14, Napoleon reached Moscow hoping to find supplies but instead found almost the entire population evacuated, and the Russian forces having retreated again. Early the next morning, fires broke across the city, set by Russian patriots, and the Grande Armée's winter quarters were destroyed. After waiting a month for a surrender that never came, Napoleon, faced with the onset of the Russian winter, was forced to order his starving army out of Moscow.

To learn more about these historic events, come along to our meeting on Tuesday 21 February at 7.30pm in Kilmarnock College Lecture Theatre.  You will be made very welcome by our members.

Our speaker that night will be Dr. Ian Matheson and the title of his talk is:

Here is some background information on our next speaker.  He will be giving us some new insight into the life of our national hero William Wallace and discussing aspects of the Declaration of Arbroath

Dauvit Broun (David Brown) (born 1961) is Professor of Scottish History at the University of Glasgow. A specialist in medieval Scottish and Celtic studies, he concentrates primarily on early medieval Scotland, and has written abundantly on the topic of early Scottish king-lists, as well as on literacy, charter-writing, national identity, and on the text known as de Situ Albanie.