Another excellent turn out of 80 members last night (Tuesday 22 March) for our final meeting of the History Group's winter programme.  Retired Inspector Alastair Dinsmor from the Glasgow Police Museum in Bell Street, Glasgow spoke about the history of the police force in Glasgow.
The UK's first Police Act was the Glasgow Police Act of 30 June 1800 which led to the establishment of the Glasgow Force.  Another eleven Scottish cities and burghs established police forces under further individual police Acts of Parliament before Robert Peel's Metropolitan Police Force  was established in London in 1829.
Alastair covered many major events in the development of the force from its inception in 1800 until its merger in 1975 with several other county forces in the west of Scotland to form Strathclyde Police.
Further details of the Glasgow Police Museum can be found at 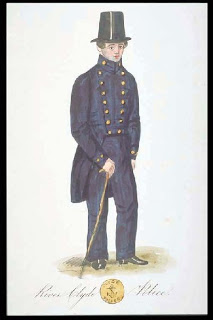