Our speaker on Tuesday 11 Dember is Norman Deeley, Deputy Head Teacher of Grange Academy.  His topic is the still contentious murder committed on the mountain of Goatfell, Arran in 1889.

John Laurie, was convicted of killing Edwin Rose on the isle of Arran's Goatfell peak in July 1889.  But did  Rose fall or was he pushed?

Rose's decomposed body was found hidden in a howff, on the remote mountainside near Brodick, three weeks after he had left London for a week's summer holiday on Scotland's west-coast islands. His skull was shattered, his spine badly broken.
John Laurie, 25 years old, was subsequently arrested after two months on the run, having fled first from Arran then subsequently his Lanarkshire hometown of Coatbridge, where on his apprehension by police he attempted suicide with a cut-throat razor.
"I robbed the man," Laurie stated on his arrest and later in his defence, "but I did not murder him." Laurie would protest his innocence until his death more than 40 years later in 1930, age 69, in the lunatic division – as it was then known - of Perth Prison.

We look forward to listening to Mr Deeley's thoughts on the case. 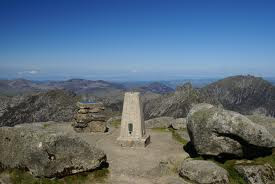